This study takes a first look at the MI50 performance on characteristic scientific and machine learning applications. 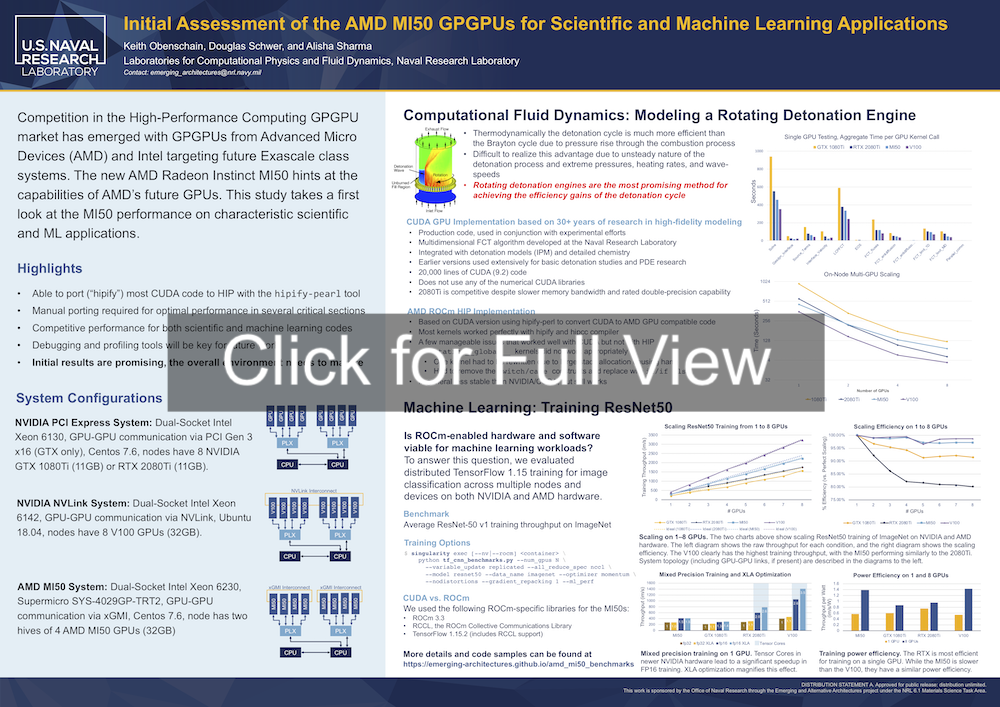 All systems are use the single-root, dual-socket SuperMicro SYS-4029GP-TRT2 system. System details, diagrams, and benchmarking results can be found in the poster.

We ran two case studies that represent common workloads we run in our lab: (a) a GPU-optimized rotating detonation engine simulation, and (b) a compute-heavy deep learning training task. Implementation and methodology details are described below.

Because our tests are run on a single node, we use the default TensorFlow Distributed MirrorStrategy with the NCCL/RCCL all-reduce algorithm.

The benchmark task is training ResNet50-v1 on a synthetic ImageNet dataset using a momentum optimizer. This compute-heavy task is characteristic of many other deep computer vision tasks with its dense image inputs and a deep, feed-forward, mostly convolutional architecture that translates well to GPGPUs.

We used the HPC-oriented container platform Singularity (v3.5.2) to manage our environment and dependencies for this study. Singularity ≥3.5 is required for ROCm support.

All reported results were collected using official TensorFlow and ROCm images available on Docker Hub. Singularity images can be pulled with:

You can start a shell or run a script with:

The following containers were used to collect reported results:

We measured computational performance of each system using training images per second.

An iteration includes both forward and backward passes through the network. We used the largest power-of-2 batch size that would fit in GPU memory: 64 images/device for the GTX and RTX systems (11gb) and 256 images/device for the V100 and MI50 systems (32gb). We ran enough warm-up iterations for the training speed to appear stable (5 steps for the NVIDIA hardware and 100 steps for AMD hardware). The final training throughput is the median of three runs with 500 steps each.

The following script will run ResNet50 training benchmarks on 1-8 GPUs. Fill out the variables at the top (container_path, gpu_flag, and batch_size) based on your specific system.

Some other helpful environment variables:

Some other helpful benchmark options:

Performance per Watt is an extremely important metric when evaluating HPC systems. This is often reported in FLOPS/W (Floating Point Operations per Second per Watt) using a benchmark such as LINPACK. For this study, we use a practical machine learning analog: training images per second per Watt.

We approximate power consumption as

The utility scripts that we used can be found here. To collect power information for different modes, we started a training run as described in Training Throughput, waited until iteration 10 of training, then manually started the power consumption monitoring tools.

This poster was presented at ISC High Performance in June 2020. To cite our findings, please use:

For any questions, please contact the authors at emerging_architectures@nrl.navy.mil.